A Body Approach to Tonglen by Kate Brenton

Let me start by saying, if you are well versed in Tonglen, the Buddhist practice, please note that this is my personal account and there is a more formidable reference at the bottom. Now, on to our story.

At least 12 years ago, a very well-financed (from a source I could not see, although I lived in her guest bedroom which she rented out) woman practiced buddhist practices and hosted Lamas on her estate off a dirt road in a pretty place.

“I am off to practice, Tonglen,” she said to me as I was making my fruit smoothie.

“Oh, it’s a very common Buddhist practice, where you inhale the troubles of the world and send out the opposite or healing peace back out to the world. It is very soothing. You should try it,” and off she turned toward her meditation room next to the garden.

I scrunched my eyebrows. Why, in the world, would I want to inhale the poison of the world, I wondered?

But of course I tried it, and it made no sense to me so it was rather ineffective. Of course, I didn’t take the time to understand the practice or educate myself or anything. I hadn’t learned those lessons yet. Life was just dropping breadcrumbs all around me in my late twenties and early thirties. Anyway, due to all that, to me—the thing didn’t work. I just bopped along my clearly-guided path of spiritual discovery soaking up a lot for when I was able to digest, integrate, and warrant the work of being nourished.

Let’s fast forward a decade plus, as I am recently sitting on my living room floor feeling slightly exhausted as my child regroups from a stomach bug, and I am feeling the gratitude and release that comes like a wave: He’s fine. He still has a sniffle, but we are no longer in the uncharted territory of sick, and indeed tomorrow he will wake up like a bullet train. We are safe.

I should be happy.

Since he is asleep on my leg, I am also sorta stuck. I suck in a deep breath and take the bait. I ask myself: What emotion is here?

I cannot move him or he will wake from a needed nap. I asked for an answer + I got it. I could feel a wrestling about inside once I had begun to relax. So, I dove in because ‘don’t ask for answers if you don’t want to do anything with them’ is definitely something I have learned.

I should probably tell you that this unexpected sickness rolled in the week of my birthday and some big plans for my kiddo. Not to split hairs, but I had planned a week of big adventure for us both. Part birthday, part toddler summer—and poof they were gone. I was bummed, and that that was understandable even amidst the unpredictable. The thing is, I had a tinge of shame for being bummed. I say all this because people talk about feelings like it is one color across the page, rather than splays and scribbles with indiscernible places of interconnectedness.

I asked my body where is the resentment?

Stomach was the answer.

Do you talk to your body? If not this my might sound crazy, but if you already have open lines of communication you probably have similar experiences of the flutter, or the whisper, the twinge or the spasm of response. Different bodies talk in different ways—all bodies talk if someone is listening.

The idea of Tonglen dropped into my head. I went for it. Maybe my exhaustion made me a better listener. Maybe life was throwing me a bit of grace.

I put my hand on my stomach and humbled myself to the shame of being a mama that is resentful of a son that got mildly, inconveniently sick. My stomach rumbled. I held the inhale then asked to feel the feeling of the opposite.

What is the opposite of resentment?

The only thing I remembered from the practice (which I had researched and learned more about since that fruit smoothie morning, but it indeed was not part of my life) was that you felt the “bad” and sent out the polarity of the “good” neutralizing the disharmony; This was my CliffsNotes.

I picked spaciousness. I opted to feel calm spaciousness because resentment to me seemed like rejecting what is, and therefore missing whatever gold was offered and definitely causing bitterness and congestion because: Hello, this was a perfect moment that was not too big, or too small, for me to see where I was not so great at relinquishing my life.

Did I mention that I had downplayed my birthday for the past few years because of this and that, and baby, and blah, blah, some not so fun life journeys. So of course, I had to sit with what was significant.

And you know what what was significant? That freakin’ practice of asking my body where the emotion was, breathing into it, feeling it, holding it, alchemizing it, and offering life an antidote, because it worked! It became an organic transmuting conversation with my body.

And I remembered in a way that meant something: that we can reschedule the celebrations and that the more I relinquish, the easier these things go. Take it for what it’s worth that the doctor on the follow-up mentioned how quickly we both moved through this summer bug. We didn’t let it fester.

You might be surprised at what lightens for you, too. Try it.

To help you, here’s a much more formidable article, from a beloved Buddhist teacher to inform your journey: Learn more about Tonglen from Pema Chödrön here.

There is so much information in your breath, in your body, in your subconscious conversation. It’s astounding what can change if we create the moment, or if life pins you down under a toddler and tells you to be responsible for your emotions because you are the adult and one of you has to be on board with how life works—and it ain’t the four year old. Take it where it’s waiting for you, I say.

So the next time something doesn’t work out, work it in; And let me know how it goes.

You can find Kate Brenton and her writing: The Golden Thread on Substack, by clicking here. 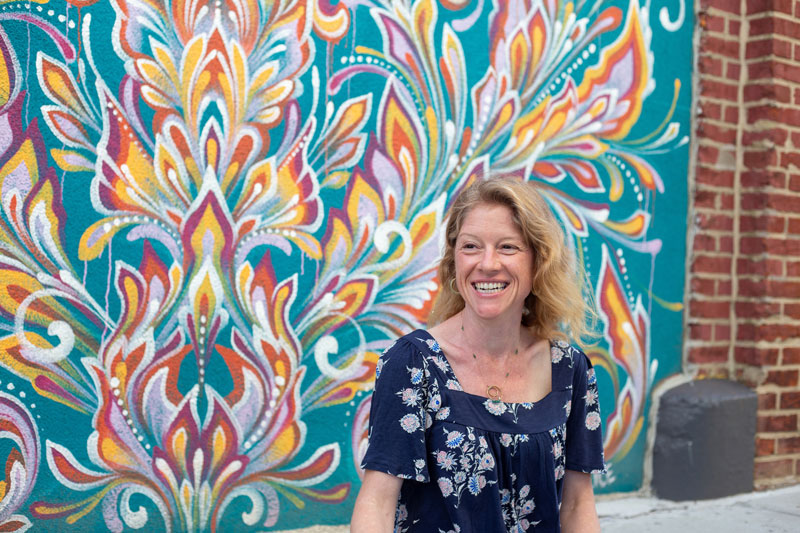 Kate Brenton, EdM, writer + holistic mentor, helps women connect the dots between their purpose, passion, and true brilliance. She loves meeting women where they are–as entrepreneurs, moms, and businesswomen at all stages of life and career–and guiding them to…