Being creative is a gift we all have. Finding out what that means is part of the journey. Writer, artist, chef, painter, designer, teacher, engineer… there is a bit of creativity in everything we do. Even doctors have to be creative sometimes, in order to get to positive outcomes.

Typically, though, we think of “being creative” in association with artists. Artists run the gamut from visual arts to music to writing, with a whole lot in between. Recently, I was speaking with a client who loves to write, but was getting hung up on her writing. It’s not her day job, but it’s part of her work, and she had a specific story to tell that simply wasn’t going anywhere.

Sigh… I can relate.

It was then that it occurred to me that she wasn’t hung up on the writing, she was hung up on “being a writer.” Because when we claim something that feels big, we also have a tendency to put it on a pedestal. Subsequently, it is no longer a passion-fueled hobby or daily endeavor, but something that is now just-out-of-reach. It’s something to either a) strive for, or b) uphold. Yikes! Where’s the fun and creativity in that?

Alas, our creativity then has a tendency to go by the wayside, because we’re striving to be a label instead of simple being creative.

In my own experience, the best words I’ve ever written came when I wasn’t trying to write. They were simply there, and I captured them, much like catching fireflies on a summer evening. However, when I’ve forced myself to sit down and “be a writer” – boy is that sometimes a struggle. More often than not, it results in my stepping away and abandoning whatever it is that I started.

You see, I’ve learned that being creative – being an artist – is more about being yourself, than anything else. Just being.

Being present.
Being open.
Being honest.
Being raw.
Being real.
Being free.
Being true.
Being.

What I’ve learned is that when I try to be something, I’m actually limiting myself.

So, as I said to my client the other day: 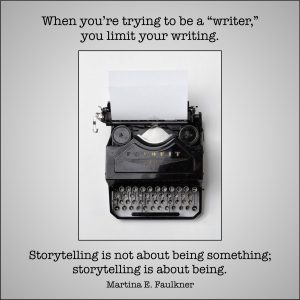