I was sitting in a coffee shop the other day waiting to meet someone, and I overheard the conversation going on next to me. It was two women talking about another woman, who had yet to join them. They weren’t saying anything particularly harsh, but not particularly nice either. When their missing friend showed up, and one of the first two women excused herself to the restroom, the conversation turned. Now the remaining two were discussing the new absentee. Again, not particularly cruelly, but not lovingly either.

I felt genuinely sorry for all three women. As I sat there waiting for my meeting, I found myself lamenting the fact that even the “safe” places we create are not as safe as we might think. And then I thought about gossiping in general and how it seems if someone is willing to talk to you about someone else, they’re probably willing to talk to someone else about you. 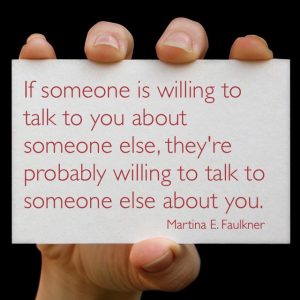 Well, I think the answer is simple, yet twofold: 1) we want connection, and 2) we want to know that we, ourselves, matter.

We want connection. This is a simple human need. Brené Brown’s research has suggested that it’s a hardwired (biological) component of being human, much like dogs are hardwired to live in packs, or deer in herds. We’re wired that way. And, in lieu of making positive connection, we’ll take anything we can get – even if it involves disparaging another human in the tribe.

I think it’s that last sentence that gets me. We are willing to “disparage another human in the tribe” in favor of our own self connecting. This puts the individual ahead of the group. Which is somewhat antithetical to our tribal hardwired nature. Which brings me to point #2: We want to know that we matter.

i think we have gotten so disconnected from each other (for SO many reasons I can get into at another time), that we have begun to feel like we don’t matter. Like our lives are not valid. And the way to find validity in a situation like that is to create a hierarchy of worth. Hence, we put people down, in order to connect ourselves up – to belong “more” to the tribe than the other person.

Sadly, this is cyclical and feeds on itself.

So, how do we break the cycle?

This is not easy work, but it’s doable. I know, because I have done it. I’m not perfect. I have certainly joined in on my fair share of gossip over the years, but over the years it has decreased more and more as I have become more aware of how it made me actually feel inside (aka: awful).

Years ago, my tolerance for gossip increased like an addiction until I was living almost entirely outside of myself, relying on anecdotal stories from my external world… and I almost died. My spirit almost died, and, frankly, my body probably wasn’t far behind.

While the externalizing (gossiping) has pretty much ceased, my life is still a work in progress as I am still slowly cultivating my tribe, or my community, and that’s ok. I’ve learned to love my own company more than anything, so I rarely feel lonely – which means I rarely feel the need to gossip or disparage another in order to feel worth. It’s quite amazing, really. And the conversation I was unintentionally privy to last week was a beautiful reminder. It reminded me of how wonderful it can feel to love oneself, because it means many of my self-loathing-fueled externalized behaviors have been replaced. Thankfully.