We’ve all been there, or know someone who has. Hit rock bottom. Bottomed out. It’s a common metaphor used especially often in the world of addiction and recovery. It describes the point at which everything had no choice but to change. Some refer to it as the moment of surrender, or letting go to let God. I think of it as the moment of possibility.

Here’s the thing though… all too often, I see or hear stories of people who have bottomed out without actually doing so, which requires them to do it again (and again, and again). I’m going to paint you a picture. 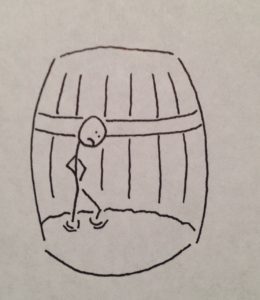 Imagine we all live in barrels (bear with me), and at the bottom of those barrels lay all the sediment and debris from our lives. It’s the land of negative thoughts, pain, suffering, and fear. So, as we get close to that bottom of sludge and mud, we would naturally want to move as far away from it as possible. Hence, often times we hear of people hitting bottom and making changes.

However, “hitting bottom” can be just our big toe touching the sludge, causing us to instantly leap toward the top of the barrel in our best effort to avoid the boggy madness. Or, sometimes we can go in up to our knees before we jump to make a change. And sometimes, sadly, people drown in the muck from sitting there and staying in it without movement.

But, what if there were another way? What if I were to tell you that all that you know about positivity and hope is not only “above” you in the barrel, but the source of light is also below you – through the muck? What becomes possible then?

Here’s how I see it.

At the bottom of every barrel there is a hole. That hole may be tiny, no bigger than a pin, or it may be large, but it’s there. On top of the hole is a covering, not a plug. It just sits there. Occasionally it allows the muck to seep out, but mostly it just holds it all in place.

Now, what if swimming down through the muck and getting to the covering to move it out of the way actually allowed your barrel to empty the sludge? What if the way “out” of the bottom is actually through it?

Too often, I think we bottom up when we are bottoming out, which often leads to hitting bottom again (or grazing bottom, actually). I think, though, we’d have a lot more success in wellness if we chose instead to plunge deeper into the mess at the bottom to release it from our containers. Of course, that would require some work and support, but it would be well worth it if we could drain the barrel and exit out the bottom. That would truly be bottoming out.

From there, who knows where we could go? Anything would be possible. Which means, at the bottom of every barrel lies possibility.