Two nights ago I was channel surfing and I stumbled upon something I’ve never watched before. It was Joel Osteen’s program. At first I was going to keep switching, but something he said caught my attention. His sermon was on moving mountains, but the point at which I joined him he had just said something that stuck with me. So I listened. It wasn’t necessarily new to me. In fact, it’s similar to other ‘teachers’ I’ve read, and things I’ve taught clients of my own. But it was new words, and I liked them. 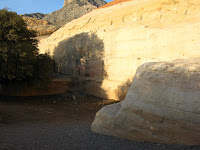 He said: “Let there be light,” as he was quoting from the Bible. But what he said afterward is what made all the difference. He went on to explain that the use of the word “let” implied that there was an opposing force already in existence. As an example, he said, “let go of my hand” implies that your hand is currently being held or restrained. Therefore, “let there be light,” means that there was darkness, through which light was needed. And instead of asking for light, God directed it to appear. As Joel said, he ‘commanded’ it. So, here’s the deal:

What if we used the word ‘Let’ more often in our lives – but with conscious thought? There’s a great Christmas song called “Let there be peace on earth.” A great idea indeed! But what if we invoked the power of that word for smaller, everyday things? Wouldn’t that, couldn’t that, collectively create peace on earth? Here are some of my suggestions, what would yours be?

Let me speak with love and grace today to everyone I meet.
Let compassion be my guiding star.
Let me choose healthy foods, just for today.
Let others share their light with the world.
Let acceptance be the driving force in interactions.
Let me share my experience and strength with others.
Let me be open to receiving the wisdom of others.
Let gratitude fill my every thought.
Let there be joy in my heart and a smile on my face.
Let me be myself, who I am, now and always.
And finally. . .
Let God. 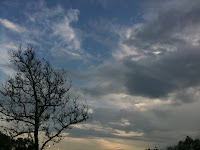 The last one is quite possibly the most simple and the most powerful. There’s a saying many of you might be familiar with: “Let go and Let God.” Sometimes, it truly is that simple. We can pray for what we want or need, but without handing it over to God (the Universe, Divine Grace, etc.) we are not allowing our needs to be met. As with everything, it is a two-step process: 1) focusing thought, and 2) letting go. So, with my list above, I focused my thought and energy on things I think would make me, my community, my country and the earth a happier more peaceful place. But in the end, I’ve only taken the first step. The second step is to actually let those thoughts go. If you think of it this way: as long as you are holding on to the thought of what you want, you are not allowing the space for it to become reality. Do you see how that works?

If your hands and heart are full of the “idea” of something, there is no room for that something to become physically real.

So, “let” is a powerful word indeed. But its true power is unleashed when we use it as it was intended: by invoking its power, and then allowing it the freedom and space to realize its potential. What would you ask for today? And are you willing to then let it go?

In Love and Light,
Martina