I recently had a conversation with a friend on Facebook that prompted my thinking about Faith and Belief. Although I was raised with a specific religion, and it influences who I am today, I don’t associate with it specifically. Instead, I have discovered the joy and purity of faith, regardless of religion. To have faith in something greater than yourself is one of the greatest gifts ever given. Why? Because it creates an awareness of possibility, and in possibility lies hope.

I remember when I was in college, my father taught me something very wise. And like so many other “young” people, I never appreciated the depth of his teaching until more recently. He said that it was in questioning our religion, all of it, that we were able to arrive at true faith. In other words, he didn’t believe that following something because you were told to was actually believing in it – but by questioning it, and raising your own awareness of it within your life and soul, you would arrive at a level of faith and belief that was pure and strong. Like I said, at the time, I didn’t get it – but I definitely know what he was talking about today. 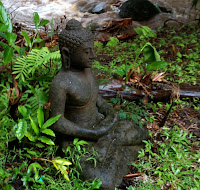 For me, my faith is based in the knowledge – the true knowledge – that there is something greater at work in the Universe. That different religions and cultures give that “something” different names, but that, for me, in the end, it’s all the same. The differences are human-made. They are not Divinely-inspired. They were created in order to bring understanding to that which is not understandable, only knowable.

In this conversation with my friend, I shared my belief that faith is Divine like the soil under our feet; and religion is human, like fences placed in the soil to separate out the masses according to their beliefs. It doesn’t change the soil. The soil remains the same.

So – what is faith? Well, faith is knowing. It’s not about understanding, reconciling, looking or searching. Faith is knowing. Whether given the name “God,” “Allah,” “Mother Nature” or anything else – faith is knowing that ‘it’ exists. That’s all. How you choose to honor that knowing is about religion and beliefs. So, now I’m going to share my word with you. I often refer to “the Universe” or “God” or “Mother Nature” in my writings – but recently, I’ve defined what ‘it’ is for me, and that’s: Divine Grace. For, when I tap in to Divine Grace, my life and spirit are filled with gratitude, compassion, light and love. And, in the end, that’s what it’s all about.

In Love and Light,
Martina