When was the last time you gave yourself a break? Is it a common occurrence? Or is it something you just wish you could do more often? The bigger question is: do you do it at all?

We’ve all grown up in a world that has become more and more technologically advanced. But these technological advances have brought with them something else: urgency. Being constantly connected in a shrinking world has sped up growth and, unfortunately, expectations.

So – what does that mean for us on a daily basis? It means that others have expectations of us that we will be available to them whenever and however they reach out. And we, in turn, have the same expectation of them. No longer is there a delay in sharing our thoughts, ideas and feelings with the rest of the world. With the advent of Facebook, Twitter and other forms of social media, we are able to announce to everyone what we are doing on a moment-by-moment basis. And, we receive these same communications from hundreds of people all around us. This ease of communication has created a sense of urgency that was previously once dominated by pony express! Think about that.

Sometimes, this urgent “need” to respond is nothing more than a reflex to react. We don’t necessarily give thought to our reactions. We just want to hit the proverbial tennis ball back into the other side of the court. And sometimes, it’s almost as if we’re stuck in a perpetual game of “beat the clock.” But, what would happen if you allowed yourself the time to respond to someone, rather than react? What would happen if you gave yourself permission to say “no” to something or someone?

Letting ourselves off the hook is one of the most challenging decisions we make. By allowing ourselves to make a different choice, and not accepting guilt or blame – we give ourselves the gift of time and space. So often when we draw boundaries (by saying “no,” for example), we feel guilty. But when we permit ourselves to hold our boundaries without guilt or blame, we are truly being supportive of our own health and wellness. Honestly, there are very few things in life that have the urgency we now commonly apply to our everyday interactions. A car accident victim arriving at the ER is an urgent situation. Your crops withering in FarmVille is not. Nor is the set of false deadlines we continually give ourselves by making endless “to do” lists. A reasonable to do list is supportive. An infinite to do list, is stress inducing. 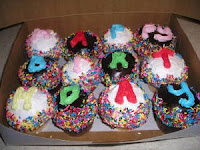 Now, where can you cut yourself some slack? Do the kids really need homemade cupcakes for their birthday in school – or would store-bought ones suffice? And what about your lists? Have you thought about your limits, and what it means to have a reasonable to do list? Can you prioritize it differently? (And by the way, hitting your limit means you’ve already gone too far. Just a thought.)

Body – Do you feel guilty if you skipped a day of working out, because you simply needed one morning of sleeping a little later? They’re both good for you – why should one make you feel guilty?

Mind – Lists and reminders are only effective if we use them deliberately. Tons of sticky notes eventually just become wallpaper. What could you do differently to lighten your load?

Spirit – When our mind and body are jumbled with guilt and stress from false urgency, our spirit becomes tired. It may take a while, but eventually it will begin to wear down. If you’re already feeling tired, at your core, it’s now time to make some decisions about what to change, and when, to support yourself in a healthier manner.

In love and light,